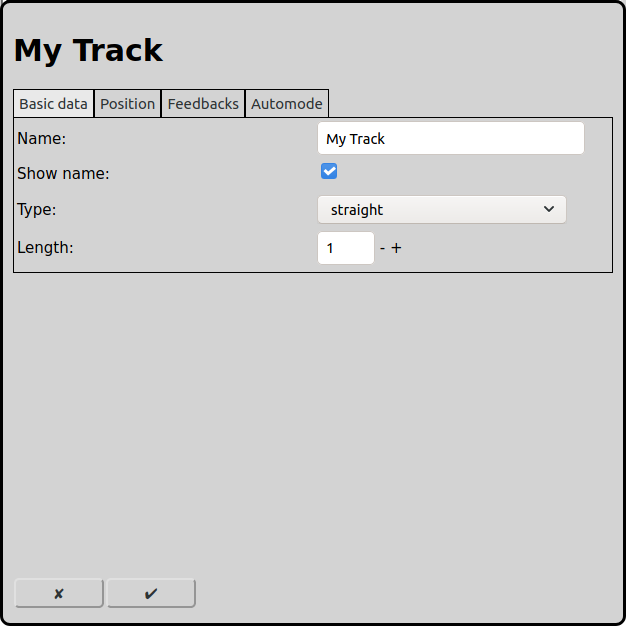 Every track requires a unique name. If there is no name RailControl chooses a name for you and if the name is not unique it will be prefixed with a number to make it unique.

Straight tracks can show the name of the track. If a track is the source or the destination of a route this is helpful. If a layout is used only for manual operation usually the names are not needed.

Curve: A peace of track that is 45 degrees rotated.

End / Buffer Stop: Symbolizes the end of a track or a buffer stop.

Tunnel (two sides): Symbolizes a tunnel. Both ends of the tunnel are integrated in one element. The empty squares in between can not be used for other elements.

Tunnel (one side): Symbolizes a tunnel. It makes sense to always two of these elements.

Link: Symbolizes a track that continues on another layer.

Crossing left: Symbolizes a simple crossing without switches. One track is straight and the other is rotated 45 degrees to the left.

Crossing right: Symbolizes a simple crossing without switches. One track is straight and the other is rotated 45 degrees to the right.

Some track types can be configured to be longer then only one square on the track diagram. The number represents the length in squares of the track. 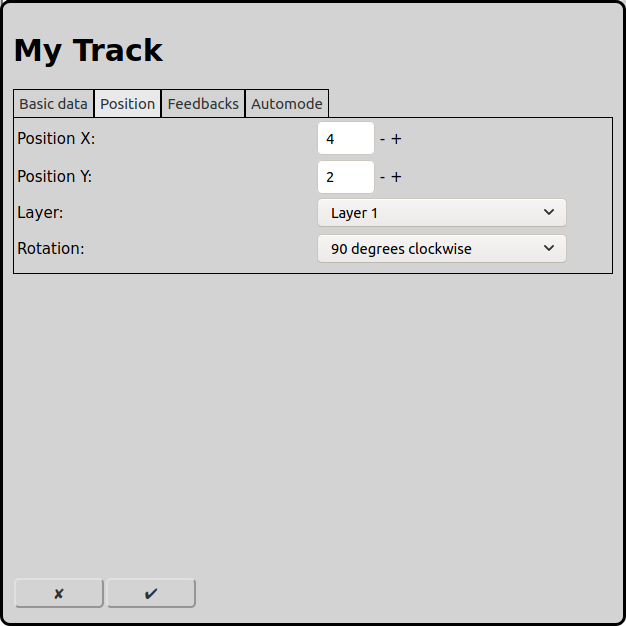 The position of the element in squares from the left of the track diagram. Counting starts at zero. If an element is bigger then one square the square at the top left is relevant for the counting.

The position of the element in squares from the top of the track diagram. Counting starts at zero. If an element is bigger then one square the square at the top left is relevant for the counting.

The layer the element should be visible on.

The elements can be rotated in steps of 90 degrees. 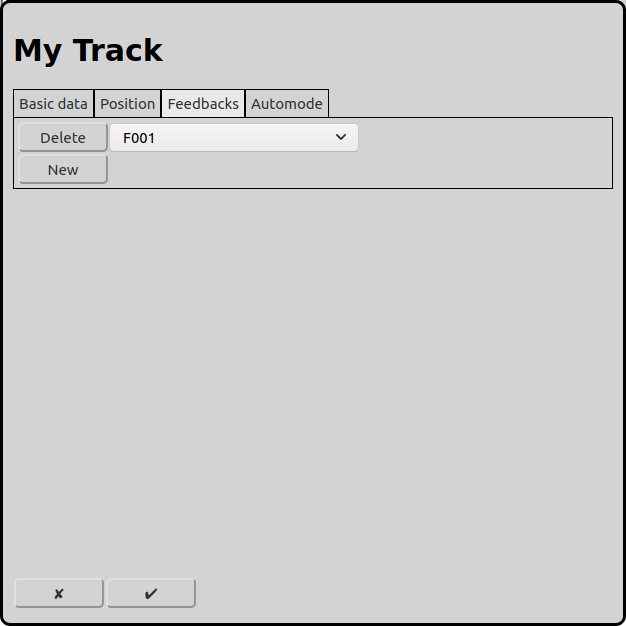 To each track one can configure one or more feedbacks. The configured feedback reflect the usage of a track. In automode a route can only use feedbacks as destination that are related to the destination track.

One or more signals can be associated to a track. Associated signals will be set to indication stop when a route is released or when under automode "Release when free" is selected and the track is released (all feedbacks are free).

In automatic operation RailControl has to choose a route if there are several possibilities. The priority to choose a route can be controlled with different concepts. Routes that are actually used will never be chosen.

System setting: The setting in General Settings is used.

Do not care: The chosen route is not important. Usually the first configured route will be chosen.

Random: The route is chosen by random.

Shortest track: The route with the shortest destination track will be chosen.

Longest unused: The route that is not used for the longest time will be chosen.

This allows a locomotive to turn the orientation on this track. Therefore a configured route starting in the other direction and the locomotive has to be configured as a push-pull train.

This makes sense at a station where push-pull trains turn its running direction.

A track can be freed if no more related feedbacks are active. So in automode a track can be released before the train reaches its destination feedback but already has left the starting track of the route.
This setting is only useful, if a track is completely and continuously observed by feedbacks with contact rails, axlecounters or other methods that reliable detect vehicles on a track.